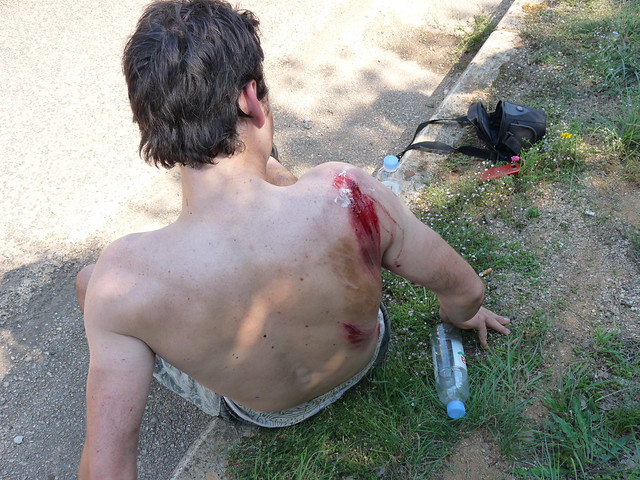 It was a 11.15 and I had been on the road since 8.30. The steep rugged hills of Croatia were already taking their toll. The relentless sun and the jagged mountains dropping into the deep blue of the sea made for a spectacular backdrop.

I had just arrived by ferry from the island of Cres and was making my way to Rijeka.

Cresting a hill I began to coast down the other side. A sign indicating a turn off was approaching so I looked down at my map momentarily to check on my progress and course. Suddenly my front wheel hit a small patch of gravel and started to slide. Looking up I tried to correct but it was too late. I hit the gutter and flew over the side of the bike. My body smacked straight into the jagged rocks lining the road edge.

Pain rushed through me as I lay in the settling dust. Out of the corner of my eye I could see three ladies running from a car that had seen the accident.

As I lay there I didn’t care so much about the pain just that I had potentially messed up the trip. Broken bones would swiftly put an end to reaching Athens.

The three ladies where angels I must say and helped me to some shade, gave me some water and called the ambulance. I was still thinking about resting for a bit and then continuing to cycle to Rijeka but one attempt to stand to my feet quickly set me straight as the pain in my hip shot through my body.

My shoulder was cut and bruised but otherwise felt ok.
45 mins later the ambulance arrived and hurried me off to the closest hospital.

For the last few days I had wondered how the Croatian people all look very fit and healthy. After my hospital experience I would see that it is only the fit and healthy that survive as the hospital system will weed out the weak.

After the nurses had finished cleaning my cuts and covering me with bandages I was asked to go to the x-ray room. They feared I had damaged my kidney and broken my ribs. I was personally worried about my hip as the pain continued to beat to the rhythm of a bongo drum.

With the help of two nurses I had to walk down three sets of stairs then up two sets. I would latter realize this is all part of the diagnosis as if you can make it up and down the stairs with help you must be ok and fit for discharge.

After an x-ray of my ribs and no x-ray of my hip even though I was asking them too I was hurried away to the ultra sound room.

Doctors seemed completely absent in the hospital and I think I would of trusted a Google diagnosis more.

When I got back to the emergency room I asked the nurse if I could have an x-ray of my hip. She said that I couldn’t as the x-ray people had gone home for the day and I would have to wait until tomorrow.

At this point I was feeling super thankful that I wasn’t more injured as this wouldn’t be the place to be if you had a really serious injury. The nurse then grabbed my leg and lifted it and pushed down on my pelvis. I yelped out in pain to which she decided that I mustn’t have any broken bones.

I was a little perplexed at her decision process but I didn’t have many options and was certainly hoping that the feeling in my hip wasn’t a break. Sadly it did feel a lot like the two other times I have had broken bones. She told me that I shouldn’t worry about it being a break. If I still felt pain tomorrow then simply come back and I can get an x-ray then. I am often a little blarzay about injuries but this took the cake.

Another hour or so and the police arrived. They decided I looked healthy enough to come down to the police station to make a report. Shirtless and covered in bandages I was still protesting but they insisted strongly and I was hurried away by police car to the station. Thirty minutes past and the police continued to shuffle paper to the sound of a TV playing their favorite soap in the background. My protests for speed and that I was in pain went unnoticed. 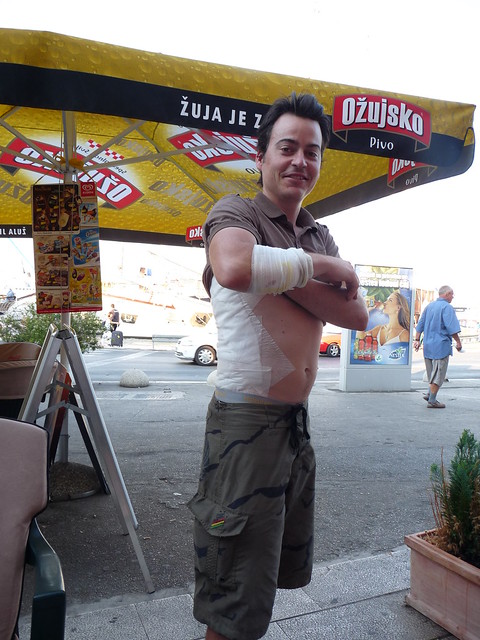 A translator arrived and begun to inform me that because I had a road accident and because it was my fault that I must pay the policemen $500. I must say I was just a little bewildered. The position I was in was humorous.

The translator was a ray of light in an otherwise dark place. She understood that the police were trying to bribe me because I was a foreigner. I was just too exhausted to care and wanted to get out of the station as fast as I could and away from this crazy town. Another 30 minutes past. A few forms completed and a breath test and I was free to go. Fortunately for me the ambulance man took me to the bus station and helped me with my sadly damaged bike. 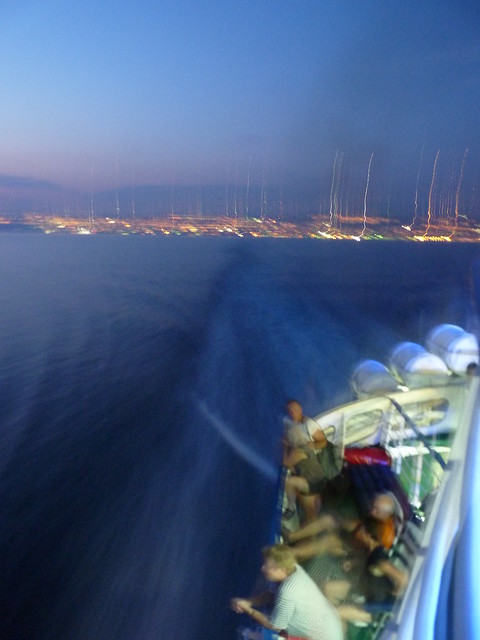 Thankfully I am now sitting on a ferry from Rijeka down to Split. I will spend the next 2 weeks relaxing and letting my body repair a little before continuing on to Athens. My hip feels a little better so maybe it isn’t a break. I will wait for the morning to see if I am still in pain.

If you don’t risk anything you won’t gain anything.